Omega International Pvt. Ltd., is one of the rising recruitment company in Nepal. The company established to meet the growing demand of youth for the foreign job opportunities. The company supplies semi-skilled, skilled, technical and professionals as per the demand of our valued clients around the globe.

Information Desk
Omega International offers its services for its clients from its main Information Service Desk from where any relevant information can be obtained. Moreover the main registration is also carried out and the data bank is maintained as well. This services as a good information system for the company which helps in updating the jobseekers’ record on a regular basis. It also operates ‘Bio-data Bank’ where each and every individual’s record is recorded and can be provided upon request as per the requirement  from our valued employers.

Communications
Each and every department of Employment Creation Service Pvt. Ltd. is fully computerized and networked entirely in order to provide our clients the best and prompt service. Our staff members are  always ready to help its clients and provide better service. the Eastern Hemisphere. It is bordered by the Arctic Ocean to the north, the Atlantic Ocean to the west, and the Mediterranean Sea to the south. It comprises the westernmost part of Eurasia.

Since around 1850, Europe is most commonly considered as separated from Asia by the watershed divides of the Ural and Caucasus Mountains, the Ural River, the Caspian and Black Seas, and the waterways of the Turkish Straits.[5] Though the term "continent" implies physical geography, the land border is somewhat arbitrary and has moved since its first conception in classical antiquity. The division of Eurasia into two continents reflects East-West cultural, linguistic, and ethnic differences, some of which vary on a spectrum rather than with a sharp dividing line. The border does not follow political boundaries, with Turkey and Russia being transcontinental countries.

the Earth's surface (6.8% of land area). Politically, Europe is divided into about fifty sovereign states of which the Russian Federation is the largest and most populous, spanning 39% of the continent and comprising 15% of its population. Europe had a total population of about 741 million (about 11% of world population) as of 2016.[1] The European climate is largely affected by warm Atlantic currents that temper winters and summers on much of the continent, even at latitudes along which the climate in Asia and North America is severe. Further from the sea, seasonal differences are more noticeable than close to the coast.

The United Arab Emirates (UAE) is a federation of seven emirates, each with its 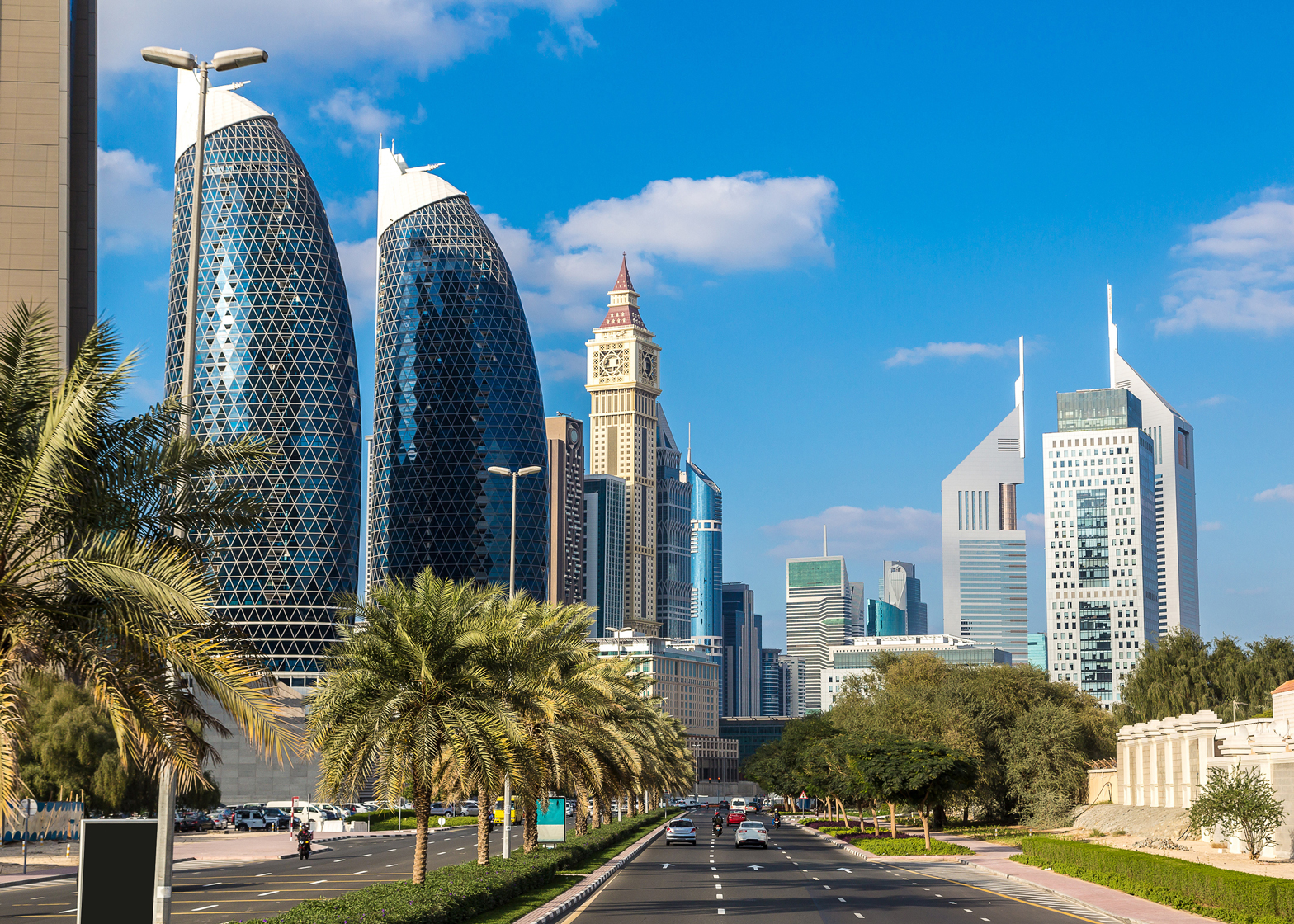 own ruler. The federal government is a constitutional republic, headed by a president and council of ministers. Islamic ideals and beliefs provide the foundation of the country's conservative customs, laws, and practices. The UAE has a modern and generally well-developed infrastructure, and tourist facilities are widely available.

consultation with a council of ministers, an appointed advisory council and an elected municipal council. Islamic beliefs and tribal traditions provide an important foundation of the country’s customs, laws and practices. Located on the Persian Gulf, Qatar is a dynamic, rapidly developing country that is among the wealthiest in the world by per capita income. The capital is Doha.

Malaysia is a constitutional monarchy with an elected federal parliamentary

government. The country is comprised of 13 states, 11 on the Malay Peninsula and two, Sabah and Sarawak, on the island of Borneo. There is also a federally administered set of territories: the capital city of Kuala Lumpur, the administrative center of Putrajaya, and the island of Labuan. Malaysia is a multi-ethnic country of 27 million people. Malays form the predominant ethnic group. The two other large ethnic groups are Chinese and Indians. Islam is the official religion and is practiced by some 60 percent of the population. Bahasa Malaysia is the official language, although English is widely spoken.

approximately 90 percent of the labor force. Kuwaiti citizens number 1.1 million of the country's population of 3.4 million, and enjoy the benefits of a generous social welfare system that guarantees employment, housing, education, and medical care.

Saud family. The king rules through royal decrees issued in conjunction with the Council of Ministers, and with advice from the Consultative Council. The king appoints members of both councils. Islamic law is the basis of the authority of the monarchy and provides the foundation of the country's conservative customs and social practices. Saudi Arabia has a modern and well-developed infrastructure, and facilities for travelers are widely available. Read the Department of State’s Background Notes on Saudi Arabia for additional information.

The Sultanate of Oman, a land of great natural beauty on the southeast corner of

the Arabian Peninsula, has a long and proud heritage. Oman has seen rapid economic and social development in the past four decades. The Government of Oman estimates its population at 2,700, 000 per the preliminary results of the 2010 census. The CIA World Factbook estimates Oman's population to be 3,030,000, including approximately 580,000 non-nationals, in its latest on-line updates (March 1, 2011). A monarchy governed by Sultan Qaboos bin Said, the country has a bicameral representative body (the lower house of which is directly elected), which provides the government with advice and is empowered to draft and review legislation. While Oman is traditionally Islamic and Islam is the state religion, Omanis have for centuries lived with people of other faiths. Non-Muslims are free to worship at churches and temples built on land donated by the Sultan. The economy is largely dependent on the production and export of oil and natural gas, but is becoming increasingly diversified.

The Kingdom of Bahrain is a hereditary kingdom governed by the Al-Khalifa family.

In 2002, the country adopted a new constitution that reinstated a parliament, which consists of one elected and one appointed chamber. Islamic ideals and beliefs provide the conservative foundation of the country's customs, laws, and practices. Bahrain is a modern, developed country, and tourist facilities are widely available. The capital is Manama.